Michaela Crimmin, co-director of Culture+Conflict, curator, teaching at Royal College of Art and Central Saint Martins School of Art talks the power of Art, and Art in relation to Politics, Conflict, Ecology 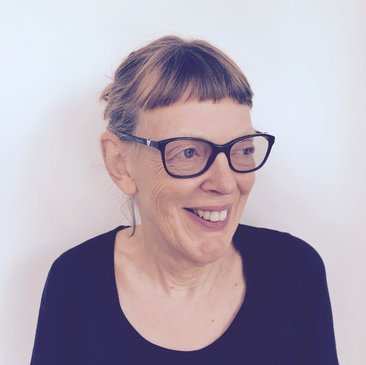 In 2011 you co-founded Culture+Conflict, could you share with us, why you started Culture+Conflict?
In 2006 when I was at the Royal Society of Arts (essentially a multi-disciplinary think tank) I set up a programme of work, Arts & Ecology, to draw attention to and encourage artists’ responses to climate change and related ecological challenges. I wanted to promote and support artists’ engagement alongside scientists and environmentalists and politicians. We commissioned artworks, ran a website, published a book, organised events in the UK, India, China, and other countries in Europe, and participated in conferences across the world. In the process of focusing on diminishing natural resources and casual consumerism, and horrified by inequality, the link to conflict – current and potential – became increasingly apparent. By 2011 I wanted to change direction and joined forces with two colleagues with shared interests, Peter Jenkinson who had been working in Northern Ireland, and Jemima Montagu who spent nearly four years in Afghanistan. We decided to set up an independent, not-for-profit agency to focus on the activities of artists who were either living in places experiencing war, or were addressing conflict through their practice. Not only did it seem there were so many international contexts in which the UK had played a part historically, and are were now still involved, but also many questions and challenges with respect to the broader subject of conflict.
For the Arts and Ecology programme at the RSA that you set up, how was art used as a mechanism to draw attention to environmental challenges?
We employed art – but also artists – to encourage debate. So for example we asked Cornelia Parker to have a conversation with the Conservative party politician the Rt Hon Ed Vaizey MP.  Parker later went on to interview American philosopher, social critic and political activist Naom Chomsky, eliciting views on the issues in questions that had not been voiced before by either men. Tate director Sir Nicholas Serota spoke alongside the then Chief Scientific Adviser to the Government, and the artist Alfredo Jaar. These events brought the urgency of confronting climate change into the wider art sector with a new seriousness and a particular potency. It raised the game. The book we commissioned, ‘Land, Art: a cultural ecology handbook’[i], remains a way of demonstrating the potential and the realities of art in addressing the inter-related causes and effects of ecological change.
Among other projects, we encouraged online debate; supported an artist to go to Afghanistan to consider the ecological impact of war; ran artist-led workshops in schools; and provided a hub for people to come together to initiate further activities. This work in its entirety provided not only a model for Culture+Conflict but also the rationale.
Culture+Conflict has highlighted and helped several artist’s projects that deal with conflict and post conflict situations. Could you share with us an example of art or an artist’s project, that has affected politics and stood up to political power?
There are so many! As one example Regina José Galindo, a Guatemalan artist, has for years made work in response to the genocide against the Mayan population. Her work is specific to a particular context, but at the same time is relevant to so many, too many, similar examples of repression. Rather than make objects, artists such as Galindo often use ‘live art’ as their way of engaging with political issues. Sometimes in galleries, often in streets and public squares, Galindo employs her own body to demonstrate against atrocities, as in ‘Who can Erase the Traces’.[ii] 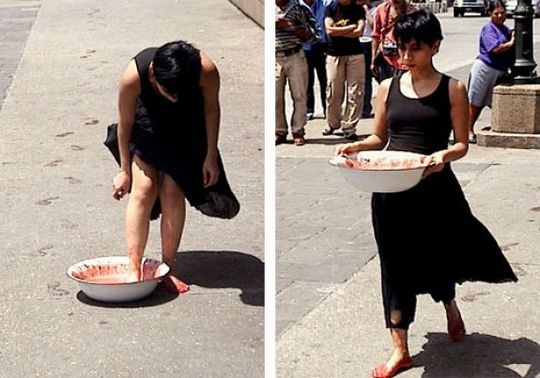 Regina José Galindo, Who can erase the traces?, 2003, video still, © promeoteogallery di Ida Pisani, Milan / Lucca
A diminutive figure in opposition not only to power, but to a dangerous and often brutal manifestation of power. A number of her performances may have happened years ago, as in this case, yet have an ongoing online presence as well as being implanted in people’s memories.
In your opinion what are the different ways, art can aid with Peacebuilding and Peacekeeping?
The ultimate responsibility for bringing conflicts to an end is clearly in the hands of politicians, businesses, the militaries that are the tools of governments, and the individuals who use violence. I think we therefore have to be careful not to exaggerate the agency of art. A painting even as great and well-known as Goya’s Third of May, or Picasso’s Guernica, has not and will not bring peace. Yet art in all its diversity has a number of contributory and constructive capacities. It can produce a space to bring people together - as in the work of Jonas Staal in Rojava for example[iii]- to work through personal animosities, confront truths, and voice differences.

Jonas Staal, New World Summit, Rojava, 2015, © Jonas Staal
Artists frequently work with the traumatised children of war in a way that can be cathartic, and in recognition of this artists are sometimes employed by aid agencies as well as initiating their own projects. Ultimately the strength of art is perhaps in the capacity of an artwork to hold the complexity of an otherwise apparently oppositional situation and not to be reductive, and to open up possibility. The most successful art elicits, even demands, a response from its audience – an engagement with the viewer. A baton in the form of a challenge, or a provocation, or a question, changes hands from artist to onlooker. Whether art’s effect is then dissipated, or constructively used, becomes a decision of ours individually or collectively.
In Culture+Conflict’s publication, you wrote about the importance for the arts to focus on the subject of conflict in higher education and for art not to be segregated from other initiatives. Do you think art could also be used as a tool, in schools, for children to understand the different conflicts and world situations?
Most definitely. We need to build empathy for both adults and children living in countries experiencing war, and for the people fleeing conflict, and to recognise that we are all implicated. Art as a methodology for exploration must go alongside and complement and test a more hierarchical transfer of information.
Conflict can also come about in the name of ‘culture’, do you think art, all types of art, can, in turn help bring people together, and build empathy towards each other?
The photograph taken by a journalist of little Alan Kurdi washed up on a Turkish beach appalled people across the world, just as had the Pulitzer Prize-winning image of the child running from napalm during the Vietnam War. The artist Ai Weiwei subsequently posed as Alan Kurdi for a photograph, which for many people was rather less successful than the one that had by then circulated online across the world. Perhaps thank goodness nobody I know of tried to do something similar with the photograph of Phan Thi Kim Phúc. People were confused by this image of Ai Weiwei, others moved. 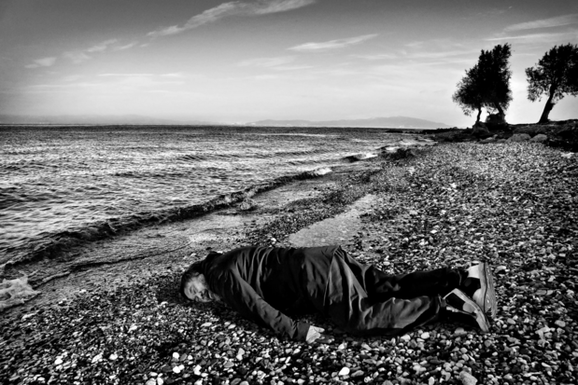 Ai Weiwei as Alan Kurdi, © Rohi Chawla for India Today
Was this art? What was the purpose even? Some people were actually furious. Eliciting empathy as a sole aim I think is perhaps best left to photojournalists. Art at its finest is more ambiguous, and fails if the intent is a singular, unequivocal, result in the form of affect. Yes, of course art can help build empathy but I think artists are on the whole very aware that anyway empathy only goes so far. We are sadly now inured to images of starving, fly-ridden women cradling dying babies. The power of art is to awaken more complicated sensibilities, to open up emotional but also cognitive responses, with images that we cannot shake off quite so readily. This is by no means easy.
You coordinated the first phase of the Fourth Plinth series in Trafalgar Square, how did you find that experience? And what in your opinion, can be done to have more art in public spaces?
I was so fortunate to be in the right place at the right time – it was the most extraordinary experience to be part of a movement to claim this very small space in central London. The credit goes entirely to Pru Leith who initiated the series, to people like James Lingwood, co-director of the phenomenal agency Artangel, for their guidance, and of course to the artists who rose to the terrifying challenge. I find it incredibly exciting to see the latest ideas, on show at the National Gallery, that relate so much not only to my interests but to the state of our world, as in the proposals by Michael Rakowitz and Heather Phillipson. 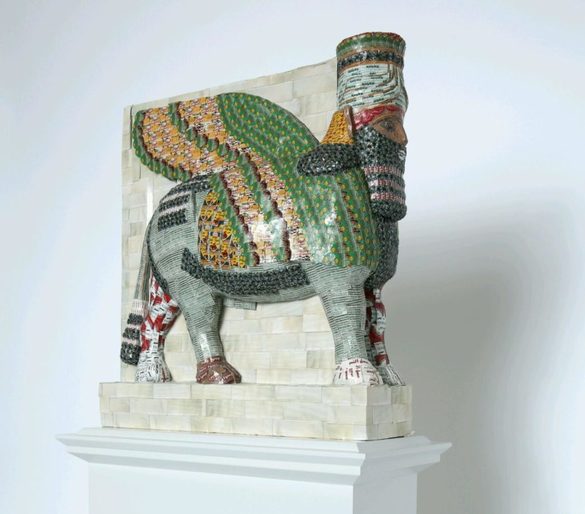 Michael Rakowitz, The Invisible Enemy Should Not Exist, 2016, photo James O. Jenkins, courtesy the artist
I think the question, rather, is not about obtaining more art, but to ask how to initiate interesting, relevant, challenging, courageous work in our diminishing public sphere. We need to find ways to identify artists that have the capacity to rise to this ambition, as in the case of so many of the Fourth Plinth artists. Instead there are way too many vacuous artworks outside galleries and museums, chosen by well meaning but ill informed people and organisations with money. Come on, we can do better!
With the rapid growth of technology, social media in your opinion, what will be the impact of art in the future?
Well, there are increasingly numbers of artists using technology in their work – Trevor Paglen and James Bridle as two stellar examples. 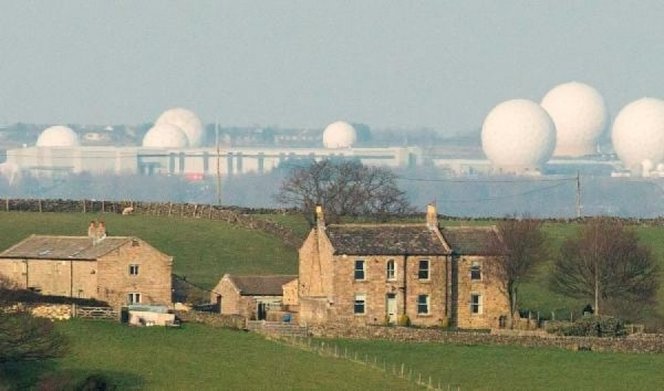 Trevor Paglen, An English Landscape, 2014, (American Surveillance Base near Harrogate, Yorkshire), © Art on the Underground
Artists are variously investigating technology as in cyber warfare, the use of underground and under sea cables, the employment of drones, and so on. At the same time, as in every other sector, art and artists’ reach is now global wherever there is the infrastructure and where there are no firewalls. We are only just beginning to see the impact of this engagement but being able to communicate with an artist in Aleppo, see an online artwork created in Baghdad, and have a conversation with a gallerist in Amman or Lagos, is simply extraordinary for someone of my generation. Inevitably the impact is felt through expanded knowledge, the sharing of different cultural perspectives, and the greater potential for influence.
Do you have a favourite art work that has moved you? And why?
I am frequently in turn intrigued, challenged, disturbed, enlightened, and delighted by not only the work of artists, but by artists. They put our politicians and most of our journalists to shame. No favourites, but I do have an ever growing list of artists and artworks that I find enriching and fascinating. At the moment we are working with a Palestinian artist, Bisan Abu Eisheh, who is investigating the conflict related archives stored at the Liddell Hart Centre at King’s College London. He will bring entirely new perspectives on the extraordinary material held.
We are in conversation at the Mosaic Rooms on Cromwell Road on Wednesday 22 February. While the audience may or may not be ‘moved’ as such, I guarantee Bisan’s views and findings will be illuminating, perhaps provocative, and certainly will encourage dialogue. Please do come and raise questions, comment, and generally join in!
[i] https://www.amazon.co.uk/Land-Art-Cultural-Ecology-Handbook-x/dp/0901469572
[ii] http://bombmagazine.org/article/2780/regina-jos-galindo
[iii] http://www.jonasstaal.nl
Copyright © Art Breath Limited 2015
/legal-notice.html