Natalie Gibson on
Print, Drawing, Living in the Moment, Central St Martins, the Students
and the Next Generation of Designers 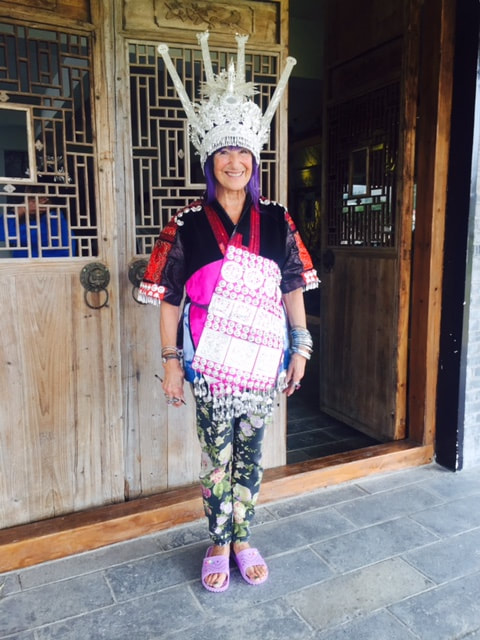 Natalie Gibson MBE legendary fashion print icon, and an inspiration to many students and designers.
Leaning on a print table at St Martins, by the screens, with a view of tables covered in white cloth and splashes of dye from the students screen printing and work, Natalie’s smile lit the room and our conversation on fashion began…
You founded the fashion print course at Central Saint Martins in the early 80’s, an art college that counts as its alumni, John Galliano, Hussein Chalayan, to name a few, Could you share with us the journey you’ve taken that led you to St Martins?

I wouldn’t say I founded it, there was already a print table there so people could print, but maybe I got it going. Many passed through the print room. In those days I taught drawing. I think I might have made John Galliano and Steven Jones draw tulips. Before that, I taught at Hornsey (College of Art) as it was then called, now known as Middlesex University, but I kept being offered jobs at St Martins, and got lured into it by the Head of Graphics.
I went for my interview with two small children, can you imagine that, I think he gave me the job to get them out of his office! I then taught printing to the graphics students.
In those days it was very primitive, we had to make the screens with cotton organza, pull them tight with a staple gun, it was really hard work but it was fun.
Muriel Pemberton ran fashion, she seemed to think I was teaching for that department, it was all kind of muddled then; I was in the prospectus twice.
I then got offered the job running Print and I have been doing it ever since, but I started teaching at St Martins in 1964.

So you have really seen it all, St Martins in 1964, which was in Charing Cross, Soho to now in Kings Cross

Either place the students are wonderful.
They are incredibly inventive, they are encouraged to be themselves, there isn’t a formula to their work, and they continue to be amazing.

The increase in fees in higher education is quite worrying.
Though there is widening participation (WP), but if you are really poor, it may not occur to you to try and go to art school. So that is worrying, probably missing on a lot of talent that way. 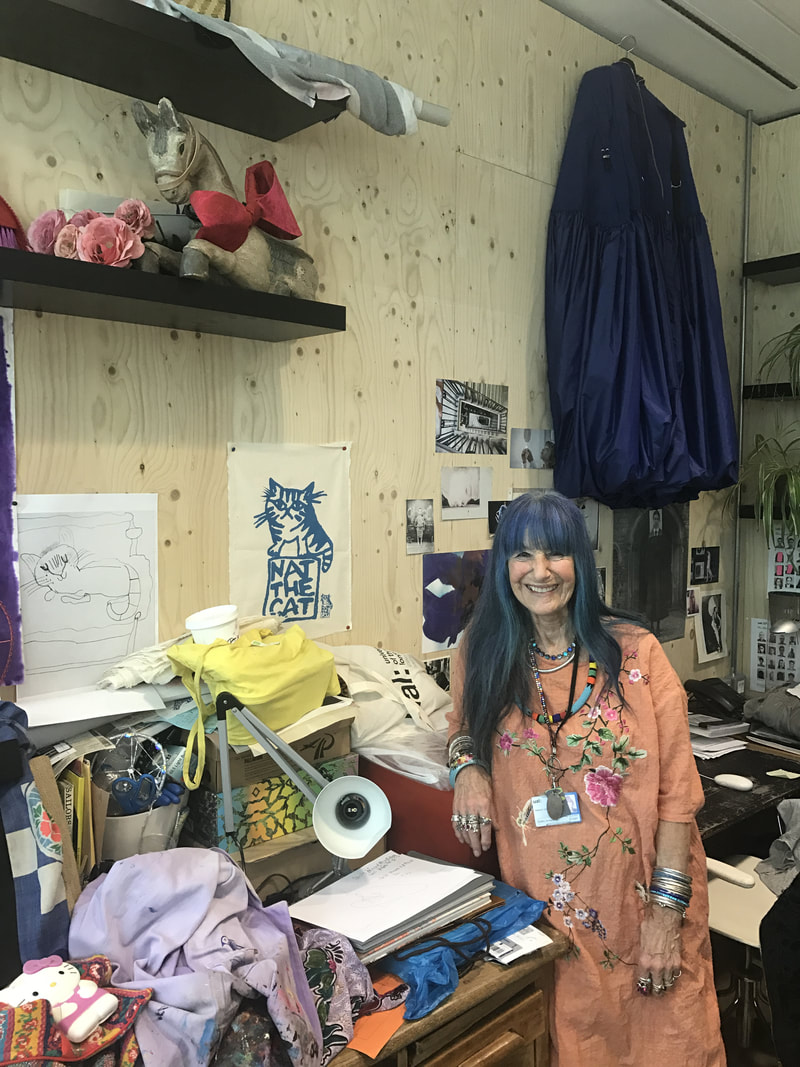 What is it about print that you love?

I find the whole thing so exciting, I actually love printing, I love the physical thing of printing, I never cease to, it’s quite weird, even though lots of things go wrong, it’s very messy, but even just with an open screen and a paper stencil I’m happy as anything, and I love colours

What do you think print brings to fashion design?

A lot of people won’t agree with me because they wear black all the time, but for me If I go into a shop the first thing I see is the colour, I am only drawn to a rail that has colour or print I like, that’s what attracts me. I am a kind of magpie for colour.
I am not a very “fashion” person, I don’t understand handbags for instance, I am quite happy with an old basket.
So do you think, there is a stronger link between fashion print and art, and that there is more to fashion than what we are projected with?

I think travelling the world and looking at things, I suppose it is my idea of fashion, well not fashion, print really, it’s so linked with drawing and looking, not taking stuff from magazines and photocopying books. There is so much going on, but I think drawing drawing drawing is so important for students.
There is not enough of drawing because it is too easy to just look up on the Internet and Google things. The students have to be dissuaded from that, otherwise everyone looks at the same information, and it’s already flat, which means they wouldn’t be looking properly at it, wouldn’t be absorbing it, nor getting really excited by it. 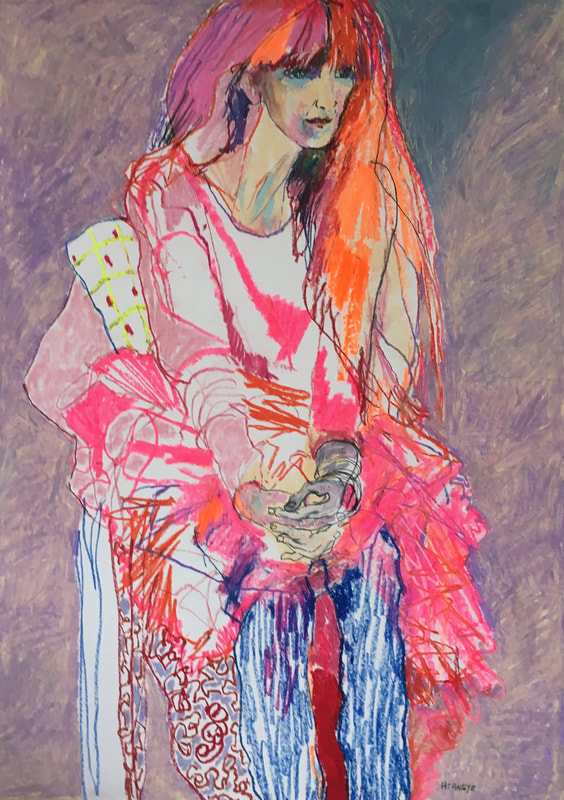 Are you seeing now that students are more into digital printing?

Oh yes absolutely, the truth of the matter is, that they can do wonderful and really amazing things, and if it is well used by a creative person, then I think it is fantastic. In my day we didn’t have a photocopier.

So will technology play more and more a part in fashion print?

I think it’s inevitable isn’t it, but I think you just have to remember to try and keep things personal, try and get a bit of you in everything, so it’s not all too mechanical.
Can one be a fashion or print designer without knowing how to draw or should that always be the basis?

Well you can be, but I wouldn’t encourage it. I think you have to draw, even if you are bad at drawing, it doesn’t matter, you have to look at things, but obviously you can do it all on computer now, but that would be a bit sad.

What would you advice any students who want to get into print?

They should be interested enough to look at stuff, and draw it, get excited by it, go to the ballet, go to the park, paint the ducks, just be aware of their surroundings, keep looking don’t be blinkered, don’t just press that phone button all the time.
What inspires you?

Cats, birds, markets, travelling, but I don’t move on much, I’ve always liked those things. My house is full of stuff that inspires me, well that is my excuse for it anyway. A cracked teapot from Russia, bunch of roses...
You have inspired so many students, and have given so much to the creative sector, you received an MBE for your services to fashion and textile design, how did you feel?

It was quite scary, I mean I was terrified on the day going to Buckingham Palace, because there was a bus strike at the time and we couldn’t get a taxi until after the event had happened, so I was afraid I would miss it all, anyway we got there in the end. Once we were inside the gates, everyone was so nice.
To be honest I haven’t thought about it since. My parents would have been astonished and I think pleased, but you know they are not around.
But yeah, I am lucky. The brooch is very pretty but I am not brave enough to wear it, Jon’s got it. (Jon Wealleans artist and Natalie’s husband)
How did the Grayson Perry Project come about? And how do the students feel about this project and meeting Grayson Perry?

It all started about 11 or 12 years ago. I knew Grayson through my friend Mel. I got on the bus one day, and I heard someone say “Natalie come and sit here”, I looked around the bus, and I couldn’t see anyone I knew at all, but it turned out to be Grayson. He was sort of dressed in a plaid skirt and cardigan and on his way to Selfridges to buy a new jumper and skirt or something.
We sat on the bus together and chatted, I told him that I was getting out at St Martins, and going for coffee, to which he said, “oh well, I’ll come with you’’. I usually buy a take-away but we ended up sitting down and talked a lot and I eventually thought, why don’t my students design frocks for Grayson. So later on, he rang me up and said “so are we doing this project?”, and then we just did and we have been doing it ever since.
He is amazing, and it has become such a great thing.
He usually comes in wearing one outfit that a previous year’s student has made, giving a brilliant talk about his work and about what he likes. Grayson is very articulate and funny, and has a really dirty laugh.
He then comes back in to look and comment on what the students have designed. Around the third week he is mostly in his knickers being measured and trying on the toiles. At the end, at the crit, he arrives with a huge bag of shoes and tries on every single outfit, sashaying up and down in his high heels in front of the mirror.
He also makes prizes for the students called ‘Claires’, a golden one, a silver one and a bronze one, they are just gorgeous, so they get first, second and third prize and then if he likes other dresses, he’ll buy them for £ 500 each.

Last year, it was actually the day Brexit was announced, so he arrived looking very depressed, we were all a bit depressed, and he ended up buying all the dresses, there were 26 or something like that. Luckily he has moved to a new studio and has a bit more room for the hundreds of dresses he has now, many of which are huge.
Grayson goes to parties or events nearly every night, so he is always in the press wearing a student’s or somebody’s outfit, which is brilliant publicity for them.
The year Grayson had his exhibition at the British Museum, which was sponsored by Louis Vuitton and others, Louis Vuitton made up the three winning dresses [of the project] and he was very pleased that year, with his couture frocks.
It’s such a nice project to have with Grayson Perry at St Martins. All the students have their picture taken with him in their designs and they love it. 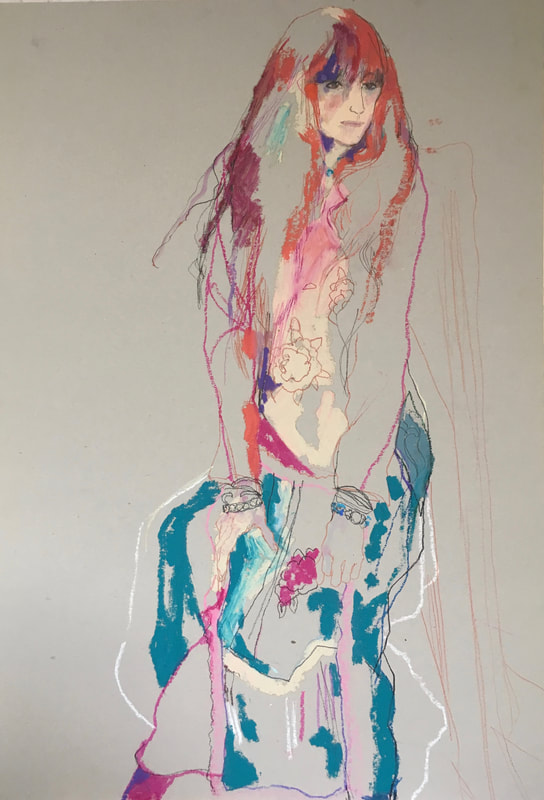 You exhibit your work

Yes, I had an exhibition in China and one at Pitfields not far from Old Street (London) and one at Livington Studio in Hampstead (London).

And you work with the Jaipur Virasat Foundation?

I do that every year they are called ‘Wonderful Workshops’. Faith Singh, this brilliant woman, started it as a charity because she wanted to keep the crafts of Rajasthan alive.
The workshop I run with Di Livey, is printing with mud and it’s called Dabu. It is mud resisting printing. It is like Batik, but with mud, a really ancient form of printing.
You can do other workshops there too.
What are you thoughts on how art, print and fashion can help people and communities?

Well I think they can help a lot. I went to an exhibition a long time ago, it was about women stitching their lives in Bihar India. The exhibition was opened by an old Indian lady who was explaining these women’s lives and how some of the women once married were not allowed out of the house. I promise you by the end, everyone at the exhibition was in floods of tears.
She got all the women telling their stories through stitching, sewing pictures of their lives, going to the well, their husbands beating them, their weddings, all done in really gorgeous roman stitch, and from this work they were able to make some money.

I think people are more and more using fashion for good, it has become a big thing, hasn’t it, it used to be hippy and now it is called upcycling.

At St Martins we have people like Simone Cipriani come in and give talks on ethical fashion and we always have a team project, a sustainable project, fairly abstract, but it means that the students from different paths have to work together; they end up hating or loving each other.